When it was established in 2007, the Finn Institute built on a set of collaborative projects and relationships with criminal justice agencies that dated to 1998. The first of those projects, for which we – then through the University at Albany – partnered with the Albany Police Department (APD), was initiated by John Finn, who was at that time the sergeant who commanded the APD’s Juvenile Unit. Later promoted to lieutenant and assigned to the department’s Administrative Services Bureau, he spearheaded efforts to implement problem-oriented policing, and – in partnership with UAlbany – to develop an institutional capability for analysis that would support problem-solving. 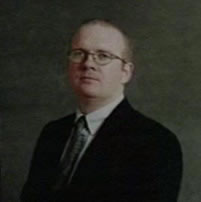 The APD’s capacity for applying social science methods and results thereupon expanded exponentially, based on Lt. Finn’s appreciation for the value of research, his keen aptitude for analysis, and his vision of policing, which entailed the formulation of proactive, data-driven, and – as needed – unconventional strategies to address problems of public safety. Lt. Finn was fatally shot in the line of duty in 2003. The Institute that bears his name honors his life and career by fostering the more effective use of research and analysis within criminal justice agencies, just as Lt. Finn did in the APD.

A brief biography of Lt. Finn can be found here.

The Institute’s logo is a flame comprised of triangles. The flame represents the fire that was, for Lt. Finn, a metaphor for the analysis that he introduced into the APD with problem-oriented policing. The triangles represent the “crime triangle,” a tool that is commonly used in problem-solving to direct attention to the three elements – a motivated offender, a suitable target, and an unguarded location – that converge when a crime is committed.